Our power went out at 9:00 this morning after several hours of crazy ass wind and freezing rain rocked my world during the night.

It's not looking good for the power to come back up tonight.

The desktop UPS has been charging our phones and my tablet but I think it's about to give up the ghost.

We might have to bite the bullet and head over to the in-laws to do laundry, shower and charge up the electronics.

The struggle is real. 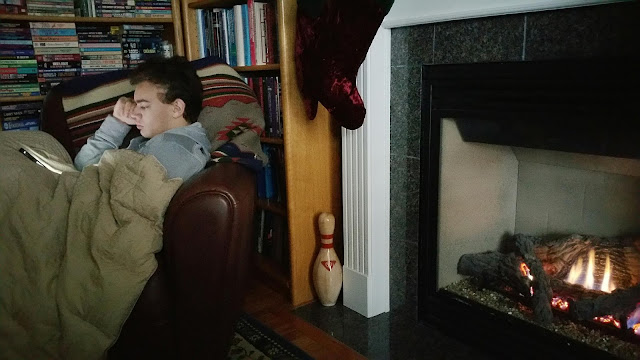 Not in the religious sense. In the weather sense.

I need cold and, preferably, snowy weather for the holidays to be truly enjoyable.

So, yes, I’m more than a little disappointed this year. Does this look like cold and wintry to you? Yeah, notsomuch.

I requested photos of snow from my dad – he lives in Oregon – and boy did he deliver.

Before I stopped writing here I had been using Live Writer to compose my blog posts.

I read recently that Microsoft had released Live Writer to the open source community but it wasn’t something I was interested in bothering with since I wasn’t posting anymore.

Today the subjec popped up again in my RSS feed so I decided to give it a whirl.

Don’t get your hopes you, I’m probably not going to publish with any regularity, or even at all.

So… how have you been? 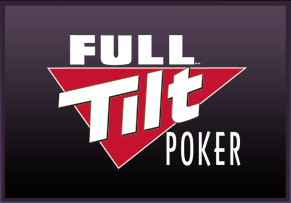 I was one of the 'lucky' few many that had a withdrawal from Full Tilt Poker seized by the United States Federal Government. Yay me!

Thankfully, I had taken almost all of my money off of FTP before the seizure and subsequent shut down of FTP. The Pokerslut Tour had moved over to Poker Stars because of their Home Game and the lower buyins they offered on private tournaments. I had put $100 on there to support my home game play but pulled the rest of my money out of online poker sites. I had my Poker Stars money back within 10 days of the request. Too bad I hadn't moved all my money to Poker Stars.

My seized withdrawal was the final step in divesting from online poker.

Imagine the thrill I felt when I heard the news that accounts had been seized knowing I had just deposited that last withdrawal check. Yep, not long after that I received the bounced deposit notice from my credit union including a 'negotiable copy' of the withdrawal that I could resubmit if/when funds were available.

The announcement that players would be reimbursed was good news but, clearly, it wasn't going to be a fast or easy process. Like many players I submitted my petition but wondered if I would ever see my missing deposit ever again.

The claim process seemed pretty straight forward. My FTP balance was correct - I had managed to turn some FPT points into cold hard cash before the site closed. I also submitted copies of the bounced deposit. All that was left was the waiting. And waiting. And waiting.

The first wave of reimbursements was announced. I received... nothing.

On March 10th I received this response to my query about not receiving any payment:

The second wave of reimbursements was announced. I received... nothing.


Thank you for your email. GCG continues to work with the Department of Justice to evaluate disputed Petitions and timelines for the remainder of the distributions. Our records indicate that you did not provide the amount that you are disputing. Please reply with the information so can update your petition accordingly.

Please continue to check this website for information regarding future payments to approved Petitioners.

So, the copy of my bounced withdrawal check was too confusing. They couldn't add that to my verified FTP balance and determine what I was owed. Fine. I did the basic math and sent them an email with that number.

On June 18th I once again asked when I could expect payment and was informed:


Thank you for your email. Our records indicate that you are disputing the account balance provided to us by Full Tilt. GCG is working with the Department of Justice to evaluate disputed and new Petitions and timelines for the remainder of the distributions. We do not have a timeline as of yet for when disputed petitions will be paid.

Please continue to check the administration website at www.fulltiltpokerclaims.com


Seriously? No payments have been made to anybody with a disputed balance? Where do you think the money came from to pay these undisputed accounts?

Just to make sure I fired off an email; their response:


Thank you for your email. The distributions that have occurred concerned only those players who accepted and confirmed their FTP account balance. Players with disputed balances have not yet received payment. As mentioned in our prior response, we do not have a timeline as of yet for when disputed petitions will be paid, however, an update will be posted on the administration website once available at www.fulltiltpokerclaims.com.

Turns out NONE of the players with disputed balances have been paid.

None of the people that had money they were expecting to show up in their accounts - money that was taken from them in the seizure - have been paid.

These people are, arguably, the ones that were most harmed by all of this and not a one of them has been paid.

Those people who had the good fortune of not having requested a withdrawal during that critical time have been paid WITH OUR MONEY.

I don't begrudge them their payments. Really, I don't. They were owed their money as much as I am owed mine. I am annoyed that they are being paid with my money and there's no timeline for my payment.

TL;DR: I'm last in line to get my money back from FTP.

I should feel guilty about how little I plan to do but I don't intend to.

Oldest is in China for two weeks with a friend and his family. Youngest just got back from one week at swim camp.

Other than a 10 day trip to visit my dad there's nothing else on my calendar.

Looks like I will be free to indulge in my binge watching of some shows I've yet to see. 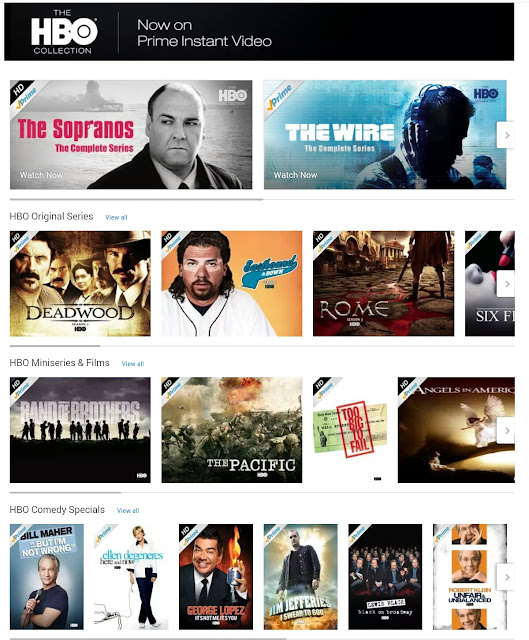 This spring I managed to talk TOH into getting a pool table. It helped that he had just spent an afternoon reminiscing with an old high school friend dredging up memories of playing pool in said friend's basement :D 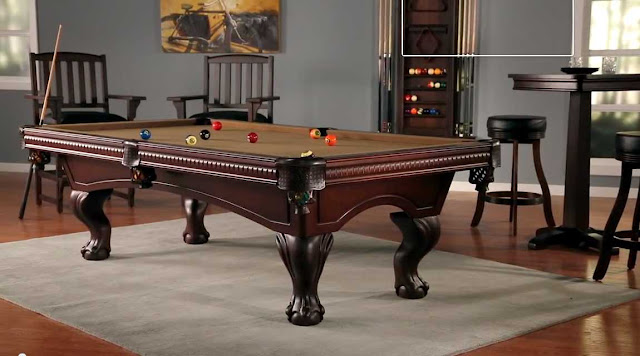 This bad boy came with the ping pong top and a wall rack.  Yes, I said rack.

My youth was spent playing pool at my grandmother's house and my own house after my parents divorced - my dad had a bitching bachelor pad made perfect by the addition of two bratty kids.

Because I learned to play pool by mirroring the person across the table from me I ended up playing left handed. This was actually a good thing because, it turns out, I am left eye dominant. No wonder I couldn't shoot a BB gun for shit, doh.

Last night we hosted the monthly couples euchre game. After euchre we had a few games of pool. Clearly some people have not had the delinquent upraising I had but we still had a lot of fun.

The boys have taken to playing pool but the oldest is much more willing to take me on than the younger (who is much too fond of shooting people with fake guns on his computer - MOTHER OF THE YEAR!). 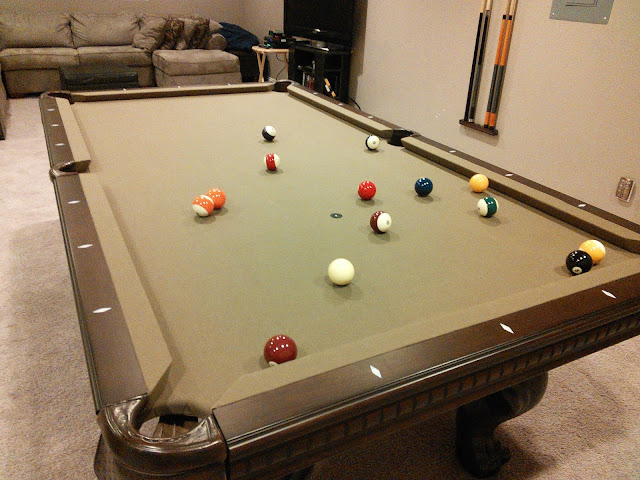 Email ThisBlogThis!Share to TwitterShare to FacebookShare to Pinterest
Labels: Kids, Mother of the Year

Coffee or Tea for Me?

I gave up coffee a while back.

I just heard a collective gasp from most of you.

It is no where near as bad as you might think. I was drinking mainly decaf anyway (yeah I just saw you roll your eyes, biatch). For many reasons I decided I would be better off without coffee.

I have always been a fan of tea, hot or iced. Switching to iced tea was easy during the summer time. I opted for the full caff version of tea because decaf just doesn’t taste as good. I was a little wound up to start with but I quickly adapted.

Now the one good thing about tea is that there’s a Brazillian different kinds. A quick search of the web leads you to all kinds of enticing flavors.

Turns out Leaves n Beans is only minutes from the rehearsal location. Of course I was planning on buying something in exchange for the free wifi so I perused their dedicated Leaves n Beans room where I found Khan’s Delight.

I have a friend who used to go by Khan (she now prefers T) so how could I pass that up???

Trust me, it tastes even better than it looks!

After a few visits to Panera I’ve figured out that I like Earl Grey, too. It’s nice to have options.

So don’t feel sorry for me. I don’t miss coffee very often and I still, on the rare day, indulge in a cup of regular joe but my everyday go to beverage will be tea. Glorious, delightful, delicious tea.